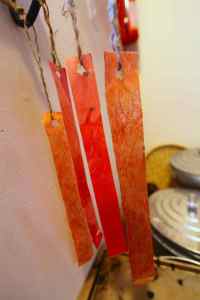 If you are someone who enjoys spending time outdoors, you’ve probably already been accosted by a bug or two already this summer. Now you may want to reach for bug spray, but before you do, why not try some of these less toxic suggestions:

Ants can be bothersome or even harmful with their bites. Here are a few suggestions for keeping them away:

Vinegar and Windex Spray – According to Melromanczak on HomeTalk, this little mixture works instantly. They measured a half a bottle of Windex with a half a cup of vinegar to kill them on contact.

Create a Barrier: Sprinkle one of the following around your patio: Cayenne pepper, Cloves and Cinnamon, Food Grade Diatomaceous Earth, Lemon Juice,  and more are suggested from Mother Nature Network.

Tell Bees, Wasps, and Flies to Buzz Off

Stinging insects flying around can ruin a day of outdoor enjoyment. These tutorial hacks can trap them, deter them, and even kill them.

Keeping Wasps at Bay: Although Science World is still undecided in this technique, many people believe if you hang a puffed up lunch paper bag nearby, certain types of wasps will be deterred. Bob Villa offers a tutorial on building a trap from a soda bottle and Natural Living Ideas suggests using spearmint or peppermint oil on cotton balls and placing them strategically around your area.

Deter Bees Instead of Killing: Since bees are now on the endangered species list, it’s better to deter them, or even have nearby hives removed for free. Bees and other insects are known to dislike mint scents. Many people have suggested spraying the yard with dollar store mint mouthwash before a gathering. PestKill suggests sprinkling generous amounts of garlic powder.

Block Flies From Ruining Your Picnic: EHome Remedies offers over 15 solutions for your fly problems, including burning camphor candles or making a yard and patio spray of 1 tablespoon cayenne pepper to 1 1/2 cups of water.

An Ounce of Prevention

Taking steps to ensure your yard is not a bug magnet is half the battle. Make sure your area is clear of garbage, empty beverage cans, and standing water. Tightly lid garbage cans and remove them from the area of your social gathering. Strategically plant herbs that deter bugs: Eucalyptus, Lemon Grass, Mint, Citronella, Lavender, Basil, are a few to mention.

With a little prevention and planning, you’ll be able to focus on friends and family, rather than shooing insects. 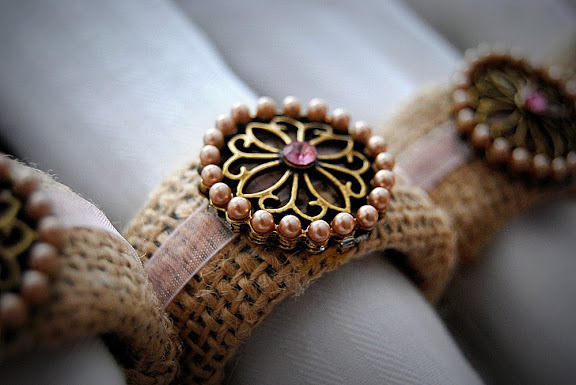 Burlap makes a great fabric base to embellishments for Fall napkin rings. Image courtesy of Tater Tots and Jello, where they offer a tutorial at: http://tatertotsandjello.com/2010/02/burlap-napkin-rings-tutorial-dollar.html

Since we covered Fall Centerpieces to Fall in Love With, it couldn’t hurt to add a few posts on how to bring your table settings together.

How to Make a Napkin Ring

Sure, you can buy plain ones at the dollar store, but this frugal gal likes to use and recycle. By making the ring yourself, you can have the control of the width – which allows for more embellishment space.

Start with the base: Save cardboard paper towel, gift wrap or toilet paper tubes. Sometimes you may even be lucky to get a tube with your last fabric purchase. END_OF_DOCUMENT_TOKEN_TO_BE_REPLACED